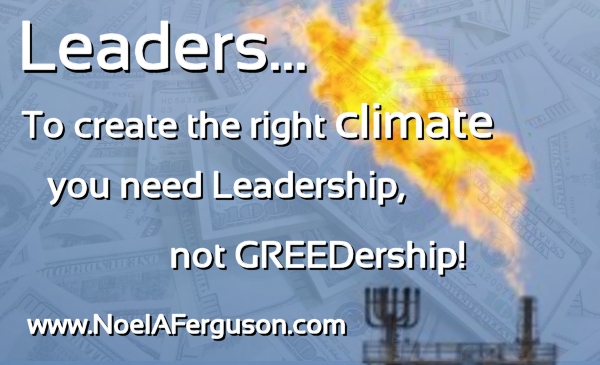 To create the right climate, you need leadership, not GREEDership.

For some people in a position of 'power', they often confuse Leadership with Greedership, a 'win at all costs' mentality. Certainly, determination and tenacity are commendable traits in a leader, but a habit of 'never giving in' and a lack of self-doubt can lead to self-annihilation. Some leaders will exclaim there can be no room for not believing in yourself. I would agree, but not if that determination is built upon a fallacy, a lack of self-awareness, or lack of awareness of the macro environment.


As a Leader, open your mind to the macro environment, how your decisions are guided by, and impact the environment.

The above factors will influence or impact a business. Equally though, YOUR actions as a business will also influence and impact each area. The larger your business, industry or country is, the greater the impact you will have. Those impacts can have positive or negative effects.

There has been much news recently of Donald Trump's decision to withdraw the USA from the Paris climate agreement, stating that he was 'elected to represent the citizens of Pittsburgh, not Paris'.

For me there is satire in the fact that the Statue of Liberty was gifted to the people of the United States by the people of France, whose capital he now derides. The statue's torch flame now seems a metaphor for the Gas Flare found at petroleum refineries, chemical plants, and natural gas processing plants.

The most recognizable phrase on the Statue of Liberty, comes from Emma Lazarus' sonnet, New Colossus, "Give me your tired, your poor, Your huddled masses yearning to breathe free, The wretched refuse of your teeming shore, Send these, the homeless, tempest-tost to me, I lift my lamp beside the golden door!"

It is somewhat difficult to 'breathe free' if the country reduces steps to protect the climate.

This is an example of a leader unwilling to acknowledge that impact and influence on the macro environment is a two-way process, and failing to consider that a coalition can be beneficial for a country or a business.

Mr Trump is correct in stating that the USA is not the only country not part of the Paris agreement, but those other two countries, Syria didn't sign the agreement because the country remains locked in a protracted civil war.

Coalitions of countries and business represent an example of what has been labelled 'co-opetition' - a blend of co-operating with rivals in some spheres while continuing to compete in others. So your rival becomes your frenemy.

The car industry, of which Mr Trump is such a fan is prime example of co-opetition with the likes of BMW and Toyota sharing their expertise on carbon-fibre and hybrid technology to create a hybrid sports car, which each will sell under its own brand and with its own unique selling points.

As a Leader, open your mind to the macro environment, how your decisions are guided by, and impact the environment; and that co-opetition and cooperation can create a beneficial business climate while protecting the Earth's climate.